This is Yusuf. He's a Muslim 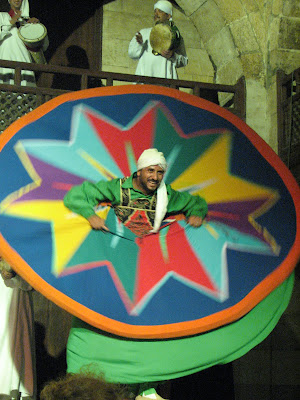 So, I went to see the whirling dervishes the other night. And the main 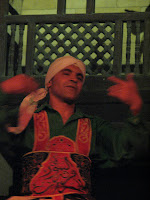 question in my mind was, "How do they not pass out?" I swear, one guy spun around for over half an hour. In the same direction. Without any spotting (that I could see anyway...) More importantly, how do they keep their dinner from ending up all over the stage? I was transfixed, amazed, and, well, a little bit nauseous. (Oh wait, that was the dancer...)

All things considered, though, it was an amazing performance, and I loved the music and the fact that I was sitting with an international group of Koreans, Egyptians, and Americans and we were having a good old time clapping along with the music and making ululations and such in honor of the performers. 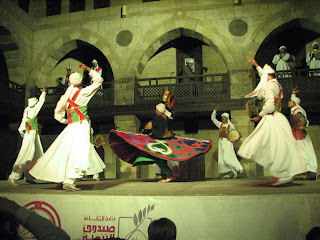 What is a dervish, you ask? (Or maybe what I heard was, "You saw what? Horseradish?") Well, the whirling dervishes originated from the Sufi sect of Islam, which in turn originated in Konya (which can be found in my Ila Turkea entry.) I was informed that the dance had nothing to do with religion (which I rather doubt, especially since one of the most popular parts was when the performer spun wildly about while trailing a banner which read "Allah," the Arabic name for God), but I'm not sure how the two relate. Mostly 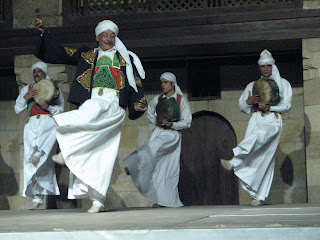 it was just a great performance, including the musicians. Everyone's favorite was the old finger symbol player, who, aside from being uber-skilled and bouncy, was also...dainty. Yes. And his facial expressions were the best! The fact that the performance took place in an old medieval structure just served to enhance the enjoyment. Aside from the fact that the whole ditty was free. Which also served to enhance the enjoyment. One thing that did NOT serve to enhance the 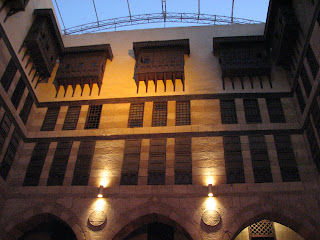 enjoyment was the fact that I was constantly getting yelled at for taking pictures. (Videos were forbidden. But I was only yelled at when I was taking pictures. Sneaky sneaky. :-o) Overall, it was top notch, and I'd recommend it to anyone. And it gave me the perfect opportunity to scope out possible "noisemakers to add to my collection of international instruments." 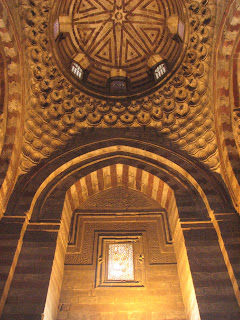 news, I also FINALLY went to see the Citadel. This time, Ann Johnson was my travel companion. We opted to walk from the Attaba metro to the fortress, which was a trip of about 2-3 km, but we enjoyed it, as we got to walk through one of the market districts and through some old Egyptian neighborhoods. We ended up touring an old madrassa (school) with a sister with amazing acoustics, (I sang a song in Latin and it was uber cool), and Sultan Hassan mosque, 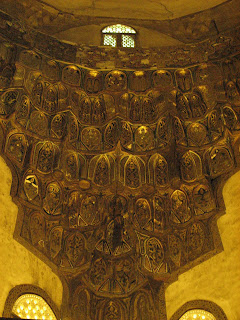 one of the 4 most famous mosques in Cairo, and then were waylaid by a pair of Egyptians who ended up just wanting us to pay money to climb up the minaret at their mosque. (Which we politely declined, saying we didn't have much money.)

We then headed to the main entrance of the Citadel, the popular name for the fortress which guarded the old city. The crown jewel of this complex, 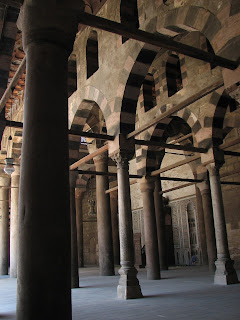 and a major feature of the Cairo skyline, is Muhammed Ali mosque, which is actually a fairly recent addition, having taken the place of some much older constructions. It was, appropriately enough, our first stop. It was immense, and rather green-tinted, but the thing I like the most were the circular patterns of clear glass globes lighting the interior. The mosaics 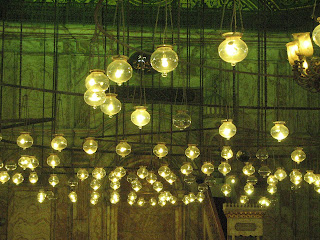 and calligraphy were also worth noting.

For a change of pace, we headed to the police museum, which focuses more on crime, especially assassinations, than history of policing. Pretty much tells the stories of the most famous crimes solved by the Egyptian police force. None of which were particularly recent...Hmmm...

We then scoured the guidebook we'd borrowed from the Knapps to find our way into the anterior section of the fortress. Our path took us right by the Egyptian Military Museum. Hey, why not? It's free, right? Actually, I had to pay a pound (like 20 cents) for some reason or other, but we got in. There was much grandiose hyperbole about stunning Egyptian victories and commanders, along with replicas of catapults, tanks, and a few uniforms and possessions of the famous, along with rows of busts of the same. The real tanks in the plaza outside looked, how should I say...wilted, and rather dejected and sad at their relegation to the archives of glory.

When we finally escaped, we quickly made it to 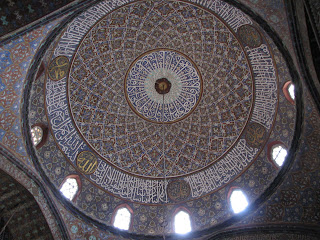 the small Suleiman Pasha Mosque, which seems to be rarely toured. We were the only ones there besides the caretakers, but the mosaics were amazingly crisp and well executed. All was well until one of the caretakers began to lecture me on how Ann was cute and I should marry her. And then we ran away. 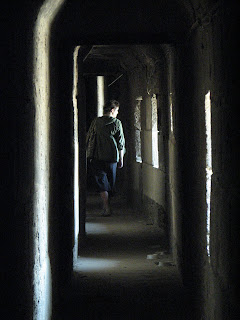 And went and hid in the passages inside the defensive walls. Between two guard towers. Where we weren't supposed to be. But hey, the windows were unbarred, so it was an open invitation, right? We had fun running around inside the walls (the passages seem to go all the way around the fortress, but we stopped when we encountered large 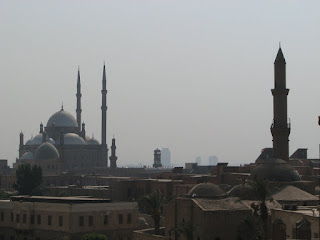 amounts of rubble, beams, and various discarded carry out containers) and took time to climb one of the stone towers and enjoy the view. And then we got a bit freaked out by the sudden appearance of strange vehicles outside, and beat a hasty retreat before we could find out who they were.

This week was also my last day of Fusha class. I passed the test, 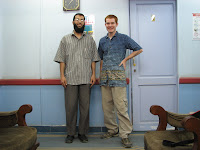 then registered for classes in colloquial, took the entrance test, and got into level 2. Wow... Skipped a few levels :-) Also had a chance to take pictures with my teachers Abdu (who taught my first 2 classes) and Amin, my latest teacher. I'm gonna miss those guys.

The final adventure of the week happened on Monday. I decided to go to a "music street" and purchase a snake charmer 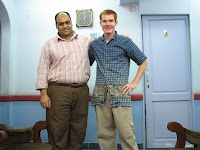 instrument, and per instructions received through a 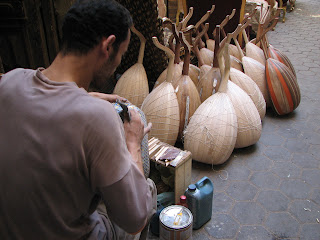 listserve I'm a part of, found the perfect place. The name of the street was Muhammed Ali Street, and it was LINED with music stores. (Not to mention gilded furniture stores, and cold drink carts, and vegetable stalls.) I popped into a few, and met a 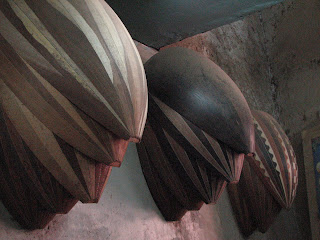 man named Marco who performed on the violin in Germany and the states. Then I continued on, and popped into an Ud (traditional 10 stringed instrument) to see how they were made. (Actually happened upon several workshops and took looks around.) Most of the parts on display were the amplifiers, which were stacked, or hung, or piled together like so many beetle shells.

At last, I arrived at a store where I found a flute I could play, AND said snake charmer instrument. 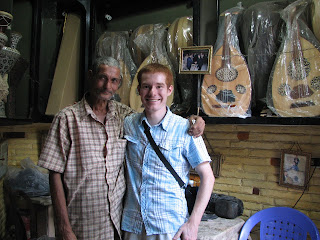 After dinking around with them for a while, I decided to pay the piper, and bought them both, and 3 extra reeds for the oboe-ish horn-like thingy, all for the farely reasonable price of about $20. 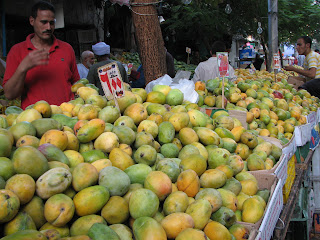 An my way back to the subway station, I passed an immense spread of mangoes, and, being a sucker for mangoes, bought some. 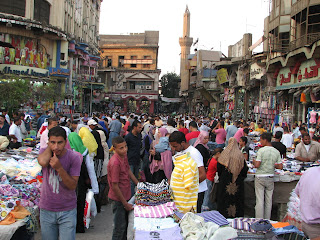 also passed a market I've been meaning to check out for some time, and decided now was as good a time as any. So, in I went.

It was the craziest market I've been to in Egypt (crazy = awesome). People packed between the dozens of tables selling clothing, and shopkeepers and their employees chanted the latest sale prices at the top of their lungs in sing song fashion (sabaea wa nus, sabaea wa nus!). I was so struck by it that I had to take a picture. Which involved setting everything down on a nearby vacant table corner so I could steady my camera correctly. 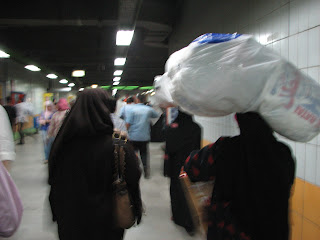 Afterwards, I headed back to get on the metro. On the way, I decided to make a phone call, except...I didn't have my phone. After a 5 second debate with myself, I decided to go back and check the table corner.

When I arrived at what I thought was the right place, all the tables were completely full. Either they had filled the corner and buried my phone, or I was in the wrong place altogether. Spoke a bit with a shop owner and he suggested calling my phone and seeing if someone picked up. "That's a good idea," I thought, "I'll do it when I get home." But wait. "I don't want to come back here just to pick it up. Better find it now." So, convinced I was at the wrong market, I walked around the block, and entered the same place from the angle I'm used to. With, of course, the same result.
. 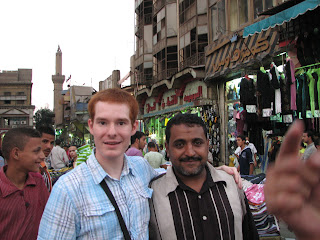 Just then, a shop boy stole a mango from me. So, of course, I felt compelled to follow common Egyptian hospitality. (If you've ever been to a tourist site in the middle east you'll get the idea. "Here, have a soda." *opens soda and hands to you* "Now give me money) So, I asked if I could use the kid's phone. He didn't have one, but a nearby booth owner did. Einteer (that was his name, as close as I can transliterate it) led me through the jumble of tables, clothes, and shouting people, all the while repeatedly calling my phone. Suddenly, an arm to the left shot into the air, waving the ringing phone as if it was a freshly caught prize trout! 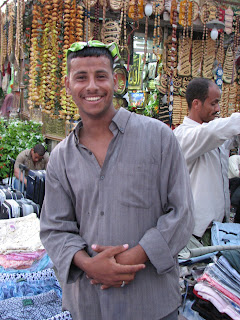 "Wal hamdu lillah!" (Praise be to God) I exclaimed, which led to a friendly conversation and everyone assuming I was Muslim. After which Einteer would tell people who were heckling me, "This is Yusuf from America. He's Muslim." I didn't want to burst the bubble, but then someone asked me straight up and..."Well, I'm not REALLY a Muslim, but I believe a lot of the same things." They were fine with that, and after pictures, exchanging numbers, and some random guy with underwear on his head. (Yah, I don't get it either.) we all parted on friendly terms. In short, I was very grateful I had lost my phone. Cause it was one heck of a cool experience.

Tomorrow will be awesome too. Cause I'm going to Dahshur. By mini bus. :-D 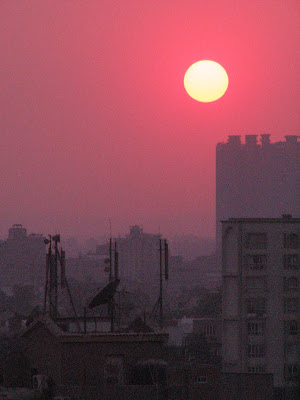 Posted by Joseph Cunningham at 1:29 PM