Joe vs. The Desert 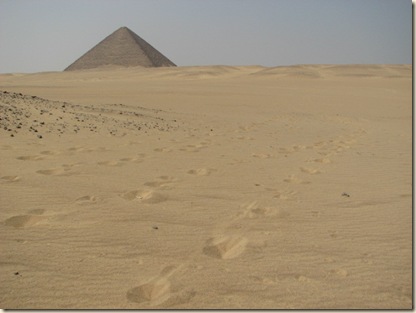 So there I was, alone in the burning sands of the Sahara desert, not a soul in sight but myself. And, of course, the massive stone pyramid to the West, if the bones of Snefru count as a "someone." I realized that I had forgotten my water, and that it was hot, and the raging sun was doing a number on my skin, but I was determined to conquer and survive. I was tired, sunburned, cramped, and a little dehydrated as I stumbled into the ramshackle camp of the Egyptians guarding the Bent Pyramid, hoping against hope that they'd have some water to share.


But let's go back a few hours and see how I got myself into this predicament. (Or, at least in my eyes, one heck of an adventure. :-)


Most of yesterday morning was spent trying to figure out how to prove all the guide books/travel sites wrong. I mean, all of the resources I found (save one) said that it was impossible to get to Dahshur (home of the Red and Bent pyramids) by public transportation, and that taking a taxi was the only way to go. I, being the cheapskate/frugal/adventurous person that I am, decided that this was an unacceptable course of action, and opted for the road less traveled. (A common ailment I possess.)


I scoured many webpages searching for any evidence that would lead me to the site of a minibus stop servicing the desired area, which is about 30 km outside of Cairo proper, and, as I said, found only one. I also posted a query to the list serve of which I am a part, and received a response later in the day which pretty much told me what my one resource had already provided. So, I had two witnesses, and the stage was set for my adventure today.


After arriving at Giza station, hopped off the metro and found a minibus heading to Morutayia, a main artery of Cairo which heads south along the west bank of the Nile. Had to ask the bus driver to stop at the right place, as he’d neglected to (after trying to cheat me out of extra money, I might add. Thank goodness for Arabic.), and found myself at a fairly extensive minibus depot under the Morutayia Freeway. Asked for the bus to Dahshur, and was informed that I’d have to go to Saqqara first and change busses from there. Fine. I was half expecting that anyway.


Was joined by a slew of Egyptians heading the same way, and ended up sitting next to Ali, who was heading back home to Dahshur and offered to help me get there. His English was great, and we chatted the whole way to the Saqqara Village stop, then hopped another minibus to the rest of the way to Dahshur. All told, I paid a grand total of, let’s see, under 5 pounds to get there. (Taking a taxi costs about 50.)


When we arrived, we hopped onto a truck that 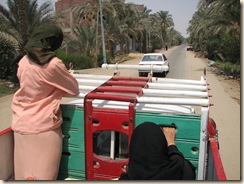 happened to be going the direction we were headed, with a few of Ali’s friends. His family seems to be pretty well known, and everybody recognized and greeted him as he passed by. I soon learned the reason for this situation. 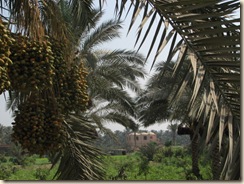 Ali invited me to spend a few minutes resting at his home. A recently married college graduate in information technology, Ali helps his father manage the family date plantation. At the moment, it is up for sale for around 1 million dollars US. They do pretty well I guess. The house, large by Egyptian standards, has all the amenities of modern life, though not so opulent as those in the states (ie the shower did not include a bathtub.) Ali and his wife live upstairs, in a separate apartment, while his father and his family live downstairs. Ali’s sister, also married, lives next door. The family also has several hired hands which help out in the garden and with the date harvest. 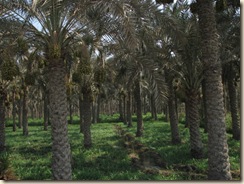 Dahshur seems to be one of the premier date growing regions in Egypt, and there are date palms as far as the eye can see. Dates come in two varieties, the more common yellow dates, and the savory, sweet red dates. I had never had a raw date before, and Ali remedied that situation as soon as we arrived. They are definitely dates. I’m just not used to the tanginess of raw yellow ones. They are good though. 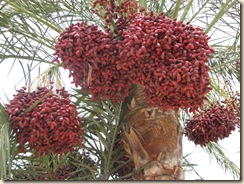 After a goblet of mango juice and a few minutes of conversation and rest, Ali walked me through his neighborhood to the entrance to the Dahshur archeological site. I thoroughly enjoyed the scenery, and greeting the neighbors as we walked by. 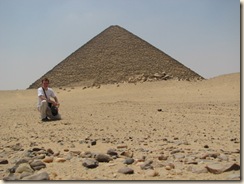 At the gate, I bid Ali farewell, and promised to be in contact (In Sha Allah.) before purchasing a ticket to the site for 15 LE. Being the cheapskate that I am, I walked the 3 km through the burning desert to the first attraction, the Red Pyramid, realizing as I did so that I had forgotten my water at Ali’s house. Oh well. We’ll see how Bedouin I can really be.


The Red Pyramid is so name because of the facing of red, weathered limestone which remains, which was originally situated beneath a veneer of whit limestone. Built by pharaoh Snefru, it is the oldest “true pyramid” in Egypt, and shows the advances of technical understanding of pyramid building. It’s nearby cousin, the Bent Pyramid, was an earlier attempt, but the architects were forced to d 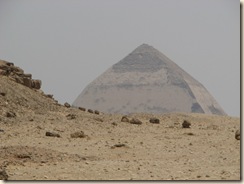 epress the angle of the pitch about halfway up when the stress of the weight became too great. (They had been building at the same angle as a step pyramid, which uses less stone, and therefore has less weight on the supporting stone beams.) 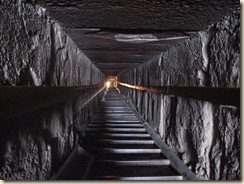 The Red Pyramid is one of the few which you can go inside, and, so, of course, I did. And the great thing is that there’s no set price for entrance. You just pay a little Baghsheesh (a tip of sorts) to the man sitting at the entrance and walk on in—down the 100 meter passage into the badly lit, dark interior, afraid for your life at every step of the steep descent. They have stairs consisting of iron 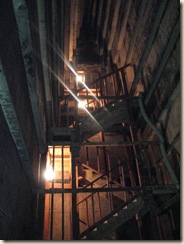 bars laid across the floor, and handrails, but at times they seemed a bit unstable. At the bottom of the initial passage, the ceiling flies above you as you step into the first chamber. Other than the support beams, and the fact you’re inside a pyramid, there’s not much of interest. The next room is much the same, albeit there is a large staircase adjoining the far wall, which leads to the burial chamber, where they found a collection of human bones.


It was pretty Indiana Jones-esque, and I appreciated the experience, in spite of the fact I sweat more inside the pyramid than outside in the desert. Haha. 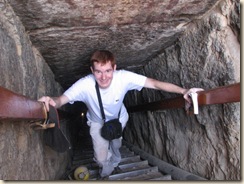 Returning up the passage was easier than going down, and I didn’t cramp up as I had earlier (stupid dehydration), and I headed out past the guards posted at the head of the road to the Bent Pyramid. 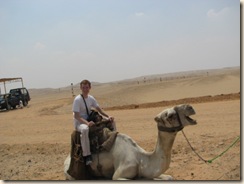 According to my guide book, the Bent Pyramid is off limits, as it sits within a military district, but apparently that’s old information. After paying 5 LE for a picture on a camel named Antonio from a guard who had no idea how to use a camera (he tried to look through the lense and ended up taking a nice

picture of his eye…), and who was later yelled at by his buddies and forced to return the money after I explained how poor I was due to the economic crisis. Haha. I began the walk to the Bent pyramid, striking off on my own across the desert when the road curved away. There were many times when I saw no one else, and it was just me and the desert. Very cool. And the cool breeze blowing across the plateau was much appreciated. And sometimes I wished I would have had Antonio… 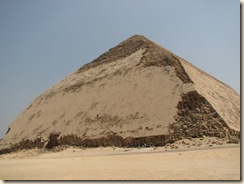 By this time I was getting rather hot and a bit sunburned (the Bent Pyramid is about 3 km from the Red) and asked for a few minutes rest in the shade with the guards sitting beneath the shadow cast by an overhang of the bent pyramid. Some of the facing had caved away, and left a nice little niche. I chatted with them for a while, and they gave me some water and talked about Obama (Obama good!) and informed me the inside of the pyramid was closed, that I couldn’t go to the Black Pyramid, and the it was forbidden to take pictures of them. That’s OK, I said, I have a picture in my mind. To which they all 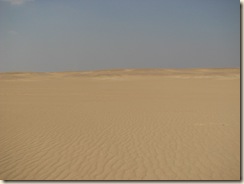 smiled. When asked, they pointed me to the gate, though they suggested taking the road. As soon as I was out of site, I made a beeline across the desert. I mean, the shortest distance between two points IS a strait line, right? 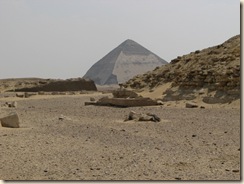 Getting my bearings at the top of each of the rocky dunes, I made my way toward the exit, only becoming distracted for a few minutes by a few ruined mastabas. I made it back to the main road about a 10 minute walk from the gate, and decided that tramping around in the desert wasn’t so bad. Next time, I need to dress more Arab, (ie sleeved robe and kofia headdress) so I don’t get as burned. 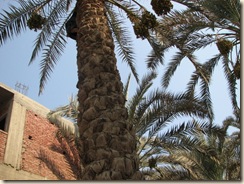 Walking back to the bus stop, about 2 km away, I got to chat with a lot of local children, some of whom wanted money, some of which gave me dates and tried to convert me to Islam, and one cute little girl that just wanted to speak Arabic with me. One of them even climbed a date palm and provided me with a handful of dates for the road. (But didn’t want me to take his picture.)


The bus ride back was fairly uneventful, except that everyone was happy I spoke Arabic and made friends with me, which is great. Got back to the apartment about 6:30 pm, having spent a grand total of less than 30 LE on the day. And Ann said she couldn’t come cause it was expensive… (Although, perhaps it’s good she didn’t come, cause I would have felt bad if she passed out in the desert from dehydration…) 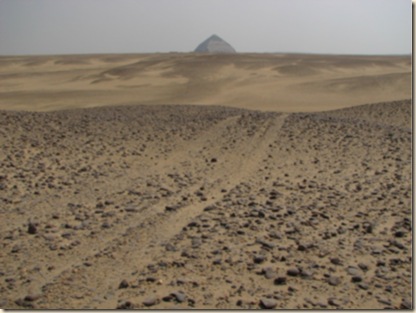 Posted by Joseph Cunningham at 11:09 AM