Life is Like One of Those Choose Your Own Adventure Books... 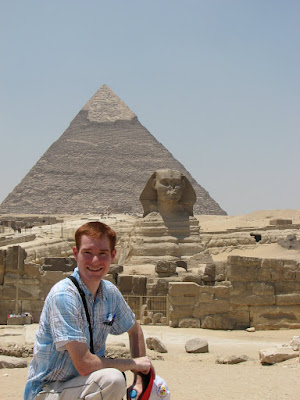 I mean, think about it. When I was in Elementary/Junior High, I used to read those things all the time. Missions to mars, you come to a fork in the path in a dark cave, which way do you go, you know, that kinda stuff. Well, now it's for real. AND that makes it that much better. Life pretty much rocks when you're having adventures.

Speaking of which, it has been a whole WEEK of 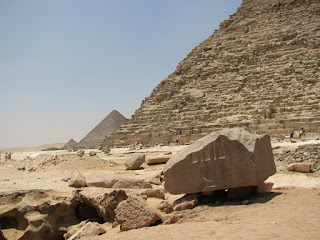 adventure. Well, a little more than a week. I'll try to give the highlights, but it will probably end up just being long. Regardless, a lot has happened, and I've learned a lot. Most of all, I think, is I'm realizing how much I'm really going to miss Egypt when I have to leave. I just love being here, and being a student, and going to Arabic class every day, and seeing and speaking with the people, and seeing my language skills improve every day.

This is also likely to end up being more of a "stream of consciousness" than chronological piece, as I'll just kinda write stuff as I think of it. More like episodes than one harmonious whole... We'll see how it goes.

First of all, I had the most singular of opportunities to go to the Mogamma, the large, Bolshevik-esque monstrosity downtown where you have to go to extend your visa. I've heard horror stories about it, but it didn't seem all that bad (despite the fact that I had to pay a fine as my entry visa had somehow canceled my residency visa...weird...)I was in and out in under an hour. They said come back tomorrow and get the visa. Not too bad, I thought. Until I came back "tomorrow" to find that they'd already closed. At 2 PM. Lame. So I came back the next day. And found out that they hadn't applied for the visa for me yet, meaning I would have to come back, or wait two hours. I chose the latter option, as I really didn't want to make the trip again.

I was pretty upset, but as I thought it out, it made sense. They have to follow procedure. And besides, I got in several hours of Arabic study, and was ALSO blessed to practice my Mandarin with some Chinese businessmen also getting visas. I needed it, too, as my language test for the foreign service was that night. I actually felt very blessed by the whole situation.

The language test...was good, till they started asking policy questions, about which my knowledge and vocabulary are seriously lacking...and at which time my verbs--and unfortunately my grammar--completely failed me. We'll see how I did when I get back to the states and request the results. 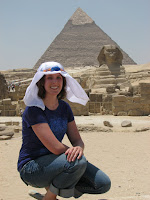 I also went to the pyramids (did I hear you say "Finally," cause i thought I did...) I was able to go with a girl named Kyra who comes to the branch every week from Alexandria. Bro. Knapp dropped us off before heading to pick some other people up for the branch party happening that afternoon, and so we headed out alone. Bought tickets from Yusuf the Ticket Man (who was glad to have my name) and then walked 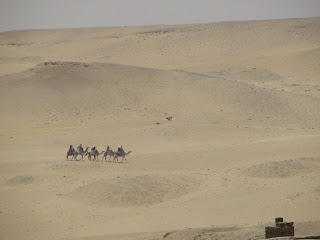 into the grounds. As is typical Egyptian hospitality, we were immediately accosted by a man selling camel rides, which we turned down, and who called us all sorts of bad things in Arabic when we refused to take any offer. He asked how much I was willing to pay, after we'd told him we were students and had no money, and he was angry when I replied 20 LE. Haha. After we got rid of him, things were fine. 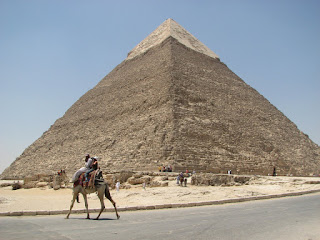 There are actually nine pyramids at Giza, but those of Khafre, Khufu, and...oh boy, I forgot the other dude's name, I think it's Snefru...are the most famous. Khufu's is the biggest, but Khafre's is in the best condition, while only being a bit shorter. It still has some of the limestone finishing tile on the top of it, which was probably originally plated with gold foil. 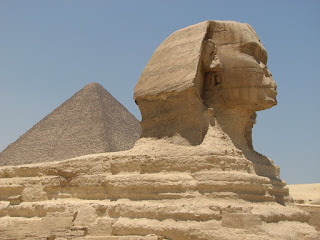 And then, of course, there's the Sphinx. I was a bit disappointed, cause I thought he'd be bigger, but it was most definitely way cool to see him sitting there nobly in the middle of the desert. The area was all fenced off, though, so I couldn't touch him. How sad. Some experts think that the head of the Sphinx was carved before the great flood, while the body was carved during Pharoanic times, due to water weathering on the face (or something...) Personally, I am inclined to agree with Stargate and myriads of sci-fi fanatics. The pyramids were built by aliens. Or, conversely, as I read in a study detailed in National Geographic, through the use of massive kites... Either way, they are quite spectacular and definitely worth the trip. (All camel hawkers aside.)

Kyra and I were joined by Ahmed (we'll call him that, cause I don't remember his name and chances are that was it) an English teacher here that wanted to tag along. And tag along.... And...you guessed it...tag along. He was really nice, but just hard to get rid of. He helped us get the bus to the metro station, rode the metro with us, helped Kyra get a ticket, (and invited her to ride the train with him to Alexandria...hmmm...) and finally left when we needed to get to our party. Pretty sure he was just interested in her. 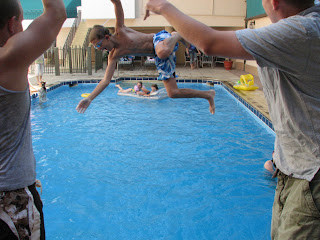 After that we headed to a ward party at an offshoot of the American embassy, which, strangely enough, I had found with Raffy, a boy in the branch, while looking for his school. Haha. It was nice to get inside and use the pool. (An toss small children into it, of course... :-)

Speaking of male/female relations, the genders here, and I'd wager in most of the Arab world, are two distinct cultures. They are separated growing up and through their education, as interaction between the sexes is often seen as unbecoming a true Muslim until after marriage. Through some conversations with Bro. Cannon, who works at the embassy and has lived in several other Arab countries, I learned that in some places technology has begun to fill the gap of courtship. For example, there is a program for cellphones, I think in Saudi or something, which allows you to input your name, age, and other info, and then put what characteristics you are looking for in a potential mate. If you come within 15 feet of someone who is a mutual match, your phones will buzz and display their number and information. Simply opening your phone and shaking it at a member of the opposite sex means, "Your phone will vibrate. I'm interested. Call me." And we all though dating in the states was hard...

This situation also leads to a lot of harassment of women, especially foreigners, who are seen as promiscuous (hey, the only ideas they get are from movies, and, well...you get the picture.) 90% of Egyptian women and 98% of foreign women in Egypt report being harassed, and I've heard stories which tend to the credibility of such statistics. Blend sexual repression with segregation of the sexes, and it's bound to happen. And Egypt is one of the less strict Islamic cultures. You may even see a few couples holding hands from time to time.

So, I'll post some pics now, cause everyone likes pics. And my next post will be more organized. :-P 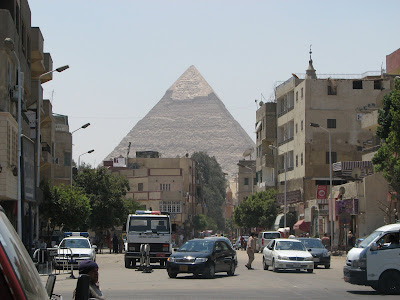 Posted by Joseph Cunningham at 1:31 PM