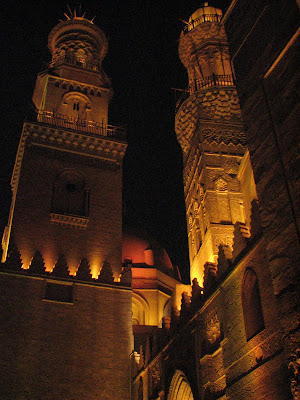 As always, it was another amazing week in Egypt. I really have grown to love it here, and when I think about my impending return to the states it makes me cry inside. Not that I don’t have good friends like all of you waiting for me at “home” in the states, but I have found that I am happiest when I am out experiencing the world and the wonderful variety present in other cultures. 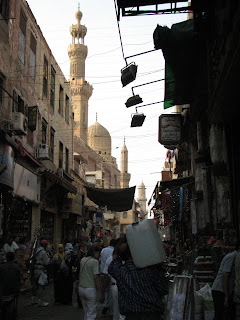 My favorite part of this week was my Thursday trip into Fatimid Cairo. The Fatimids were the Islamic Dynasty which ruled Egypt for several hundred years beginning around the 900s AD. Though Cairo had existed as a city before their rule, they renovated and embellished much of the existing medieval city, as well as constructing many new buildings, especially mosques.

The Main thoroughfare of the old city runs down Sharia Mu’zzli Din Allah, which also happens to be the street which houses Cairo’s main tourist market, 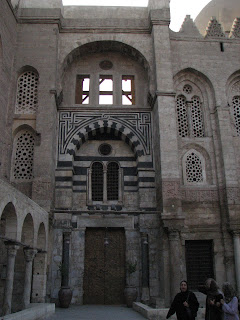 Khan Al-Khaleilei. (“Sharia” means “street” in Arabic, by the way.) You may recall a much earlier post which mentioned a bombing in the same area. Anyway, this is the road which brings the walker past most of the city’s most famous mosques, as well as schools, bathhouses, and medieval mansions, some of which have been restored in recent years. It is fairly extensive, as there are several interesting districts which branch off from the main street. There was no way to see them all in one 4 hour visit, so I will be back again soon.

As with all “touristy” places, there is the usual assortment of shop owners, hustlers, and random children asking you for money. One tried to convince me it cost 100LE (about $20) to enter an adjacent mosque, but when I refused to pay, he said he was “joking” and that the entrance was free. Right… I’m sure he would have “jokingly” handed me my money back if I had paid… :-P I did go inside, but decided to forgo the trip up the minaret which cost an extra 10 LE. Perhaps another time. The i 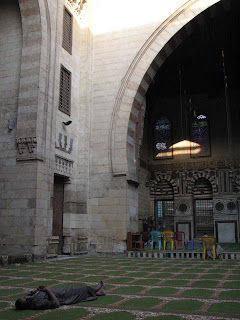 nsides of most of the mosques were fairly unmiraculous, marble courtyards surrounded by raised platforms porticoed with pillars. It seems to be common practice to sleep in the mosque, on the plethora of arrows pointing toward Mecca (After all, it IS one of the few clean places around...) The main attraction of the walk was the Cairo skyline. There are so many minarets that it's amazing. And, as an added bonus, there are lots of old medieval houses that have been restored, and if you jaunt off the main road, there are neighborhoods and juice shops. I met an 8 year old boy named Amr, and he showed me where a good place to get juice was. I had mango. The mango juice here is miraculous. I will really miss fresh juice. Especially of the tropical variety. Also, Amr was awesome, cause he didn't ever ask for money, or even accept a juice when I offered it to him. That really is rare. He was just a nice kid. And allowed me to practice my Arabic. And asked if I was Syrian. Perhaps my Arabic isn't so bad... It was fun 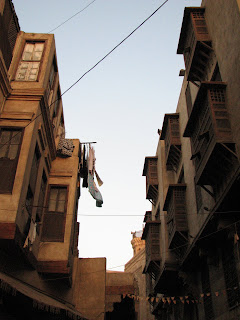 following him around through the outlying areas, as there were some tunnels under the streets, overhanging buildings, and lots of colorful laundry hanging out to dry. Speaking of laundry, I should fold mine...the drying racks here are just too convenient! Anyway, after the juice, I kept on going toward the end of the street. About the time I caught sight of the city wall, I also noticed large groups of Muslim men clad in white heading into a nearby large Mosque. I 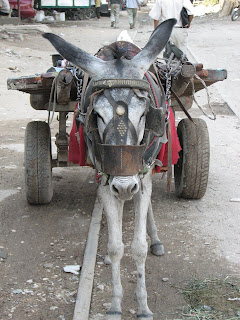 decided to join them, and followed the nearest goup inside. The mosque was the largest I've been in here in Egypt, and the courtyard was probably about 65 yards sqare, all covered in shining marble. As soon as I stepped into the courtyard, I recognized the feeling of the Holy Ghost. I wasn't really expecting that. I guess when there are that many people worshiping together and doing their best to please God, the Spirit is bound to be present. I felt honored to be near them as they prayed. I walked along through the lofty portico in the falling twilight, the experience made all the more surreal by the cooing of hundreds of pigeons on the lintels between the columns. When I made it to the far side, I was able to see the people worshiping through gaps in the fabric stretched out for a bit of privacy. It was interesting to note that there was a 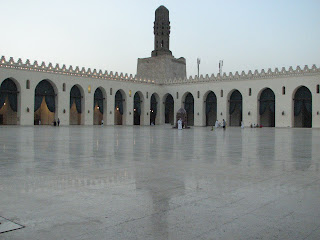 section for women as well. It seems that, as in most cultures I guess, "Sunday best" for women is usually quite colorful, but men are relegated to black and white. The white-clad men and colorful women were separated by another cloth barrier into separate groups. Meanwhile, the children (dressed in the same manner) sat in groups or scampered around the courtyard waiting for their parents. 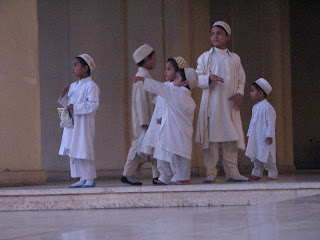 After the sunset worship, everyone cam out and congregated near where I was standing, pointing to something in the sky which I couldn't see. I was completely lost until a friendly Egyptian informed me that it was the moon. The crescent moon, as I'm sure most of you know, is the symbol of Islam, and its placement near one of the mosque's minarets was quite fortuitous. Also read a bit of history about the mosque (Al-Hazim, it's called.) It was built by a megalomaniac, homicidal Caliph in the late 9th century. Once, a victorious general was beheaded for bursting in to proclaim his success to find the caliph covered in the blood of a recent victim. However, one of the ruler's devotees proclaimed him divine after he disappeared without a trace into the surrounding mountains, and started a cult branch of Islam to his name. Interesting history. Also had the 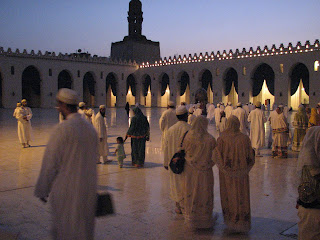 opportunity to have dinner at the Knapps again this week. They are an awesome older couple that has really just taken all of the young single adults here under their wing. They make sure that we are always cared for and well connected with each other. (And also give us plenty of opportunities to sing...more about that in a minute...:-P) Anyway, this week Nicci was in charge of dinner, and cooked some amazing chicken stuff. We had a group of ten or so there, and after dinner we watched the Lion king. Kevin have made it a habit to sing along with any music in a film we watch, which was a great hit last week with Abba songs from Mama Mia. (In fact, such a hit with Bro. Knapp that he cracked it out again and we sang through the best ones until I almost lost my voice...haha) Later, at around 9 PM, we went star gazing. I didn't have any star charts, and it was pretty windy, so all that we were really able to see was Jupiter and its 4 Galilean moons, but laying on the ground and chatting while staring at the stars was worthwhile too. And afterwards, we were treated to ice cream at the JW Marriot hotel. Got home pretty late! Well, that's it for today. I think I'll post some scuba pics in the appropriate blog so you can see them. My instructor just put them up today! 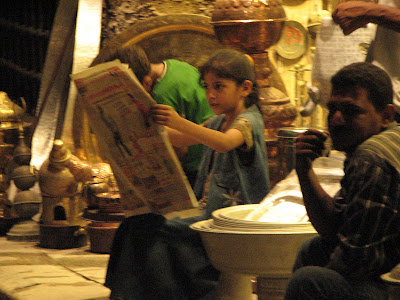 Posted by Joseph Cunningham at 1:05 PM