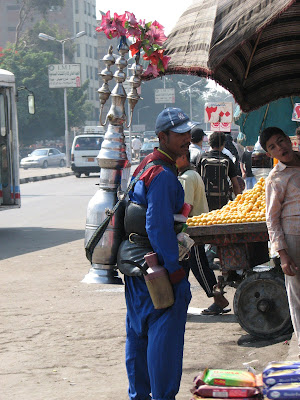 The tea seller at El Monib, near the Pharoahnic Village
Because those are two of the things I will be reading/already read about this week. YES, I am preparing for my Open Water SCUBA Certification, and picked up my manual this past week. And, I am reading a book about Ramses the Great, just because...he's cool...and was a redhead.
. 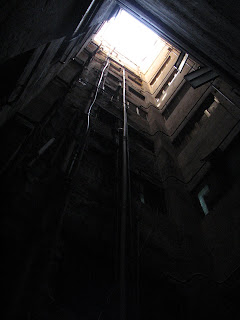 This week saw the end of this block of Arabic class, and the next one doesn't start until the 25th of June. Hopefully by that time I'll have another apartment lined up in Maadi, close to the church and where I tutor four times a week. It's kind of a drag having to make the forty minute trip 5 times a week, especially when the subway is packed (and not air conditioned...) Speaking of packed subways, I had to wait for 20 minutes to catch the one to church this morning. As you can imagine, being the only subway for 20 minutes, it was DANG crowded, and hot, and uncomfortable, especially because I was bringing my computer and scriptures to church for my Sunday school lesson.

However, that aside, this week has been a string of one awesome day after another. I've enjoyed studying my manual, which helps me to avoid such things as the bends, popping my eardrums, and exploding my lungs accidentally while diving. Those, I believe, are definitely good things to avoid. I just hope I can remember all the little random things I need to do for diving to be convenient/safe/fun. Well, I think it would be fun for me even without the convenient/safe parts, but those would be nice, too!

I also got my certificate for the 3rd level of Arabic recently, on which I was ranked as having overall "excellent" performance. Woot! 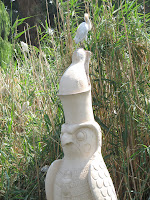 As far as other happenings, I was able to go to the Pharoahnic village yesterday. It's an island in the Nile, surrounded by a dike, and thick with

papyrus plants. Dr. Ragab (the father of the current Dr. Ragab who I spoke with) discovered the lost art of papyrus making, and made the island as a place for people to come see how life was in ancient Egypt. The tour starts out with a boat ride around the canal, passing various statues of the ancient gods and pharoahs while a recording tells their stories (over techno music. Haha.) 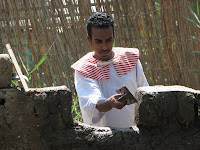 What's better, there are HUNDREDS of white ibises roosting in the papyrus marsh behind the statues, or even perching on their heads, which makes it that much cooler! Then, there were the shoreside reenactments of ancient life, including farming (plowing with oxen, sowing followed by sheep to tamp down the soil), honey making (beehives of clay tubes, still used today), weapon smithing, weaving, reed boat making, and...Moses? Yes, Moses too. Dr. R must be Coptic... 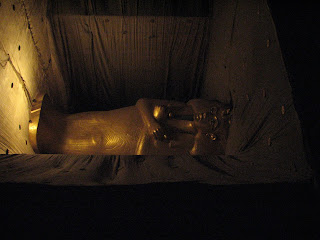 Landing on the island, I was taken around by Neesa, an English speaking guide, who explained the replicas of a rich and poor home, the temple (based on Karnak, though to a much smaller scale), and the exhibit displaying what King Tut's tomb looked like when it was discovered. It was pretty well done, and I liked it, as , of course, you all knew I would. :-D

I also enjoyed seeing the museums devoted to Nasser and Anwar Sadat, the two most famous presidents of Egypt. The Village boasts the only Nasser museum in Egypt, and has such artifacts as his glasses and pajamas, as well as providing a lot of information about his life and administration.

The same kinds of things are on display at the Sadat museum, though this also has a diorama of the 6th of October war, where, using Russian equipment, the Egyptian army under Sadat pushed the Israelis out of the the Sinai. There's even a district of Cairo called "6th of October City" (and another one called "Sadat") Anwar Sadat was assassinated in part as a result of peace overtures to Israel and the Camp David Accords, during a festival by three military officers. They have pictures of the assassination taking place. Over 3o bullets were removed from his body. Two of the conspirators were hanged, and the third remains in prison to this day. (No one knows why he's still there.)

While in the museums, I met a girl who is training to work there as a guide. She used to be a newspaper reporter, but is stopping for the time being at the behest of her father, I think because he believes it too dangerous. She, however, plans to resume writing under an alias. I really respect people like that, especially members of the press, because I believe the public has a write to know what's happening. I told her as much! :-)

Went around on my own a bit, then headed back to the main desk and talked with Ahmed, the 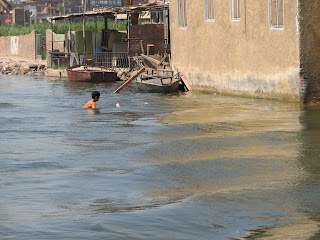 director for half an hour. He wants to meet up sometime just to chat. Hopefully we can, cause he's cool! Then went on another boat ride around the whole island, and saw some kids swimming in the disease infested Nile. Not a good idea. Really, not a good idea.

So that was my main adventure this week. Hopefully next time, I can tell you about SCUBA!!! :-)
Posted by Joseph Cunningham at 6:18 AM