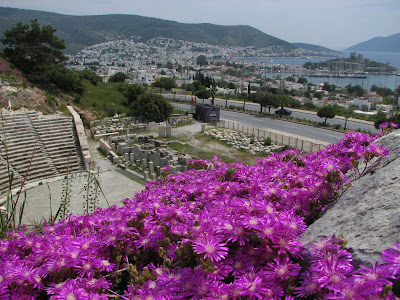 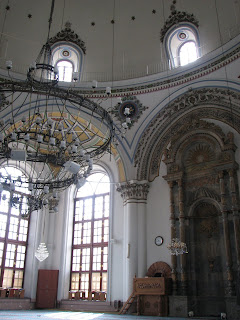 I had been feeling a cold coming on for a few days, and then decided to take the overnight bus to Konya and tour the next day, getting almost no sleep as a result. Not a good idea, and I really don't recommend it to anyone. Most of the day I was just trying to put one foot in front of the other, and hoping that I would get something out of all the sights. After all, Konya is the birthplace of Sufism, and the original home of the whirling dervishes. (We didn't see any real ones, but took a picture with the gilded golden dervish statue in the center of town.) We visited a few museums, on of which included the tombs of the most famous dervishes. It seems like the taller the turban on the tomb, the more important the dervish was. Oh, and they had dervishes for everything. Even a special dervish to go to the bazaar and buy stuff for the rest of the dervishes. And they had special circular dancing boards, with a nail in the middle, so that they could practice "whirling." On the tram back to the bus station, after sleeping on the grass near the main road and getting yelled at in Turkish (in all fairness I think he was telling me to guard my things) we met a nice Turkish student studying English and she made sure we got off at the right stop. And then it was on to
. 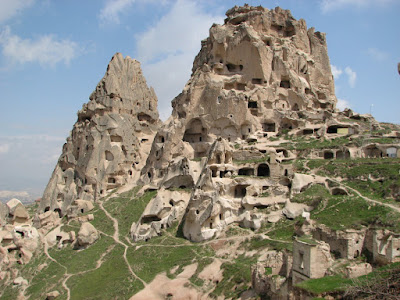 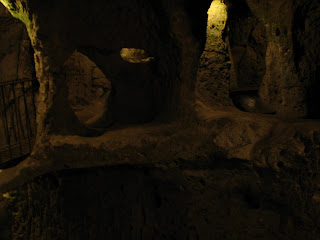 In the heart of the ancient Roman province of Cappadocia, Goreme is home to some of the most famous scenery in Turkey, as well as some of the most interesting (in my opinion at least) ruins. These consist of several underground cities, which are despite their narrow, dual entrances, engineered to discourage invasion, are immense below ground. The largest includes stables, kitchens, living areas, wells, a church, and an MTC. Yes, you heard that right, a missionary training center.
. 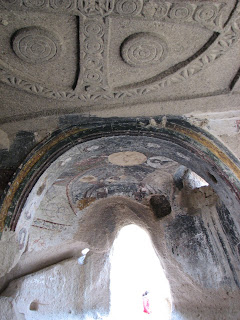 Cappadocia became a stronghold for Christians during the era of Roman persecution, and the walls of various slot canyons are riddled with cave churches and dwellings that date from the Coptic era and before. Lindsey, Daphne, and I had a great time exploring these churches for a day, and climbing up into places where few people go. We even found a meditation chamber in one church, which had the quality of amplifying your voice when you chanted in just the right place. I sang an old song in Latin that I learned in men's choir at BYUI, and it sounded really cool.

Goreme is also the home of the quirky, or infamous, depending on your point of view, Love Valley, which is full of rock pillars which resemble, strangely, large thalluses. Yes. So that's enough on that.

Also, we found a superlative restaurant in the main shopping district, home to a lively Turkish chef named Mustafa and a man which we know simply as "the Guru" due to his transcendental view of life. We ate dinner with him once, and wanted to get him something, and asked what he wanted. Looking in front of him, he saw what he had already, and said simply, "soup." He is a Sufi musician, and has performed in many places around the world, including Carnegie hall. And he was very good. We enjoyed listening and watching Mustafa dance, especially when he included enthusiastic Japanese tourists.
. We stayed in a cave hostel, and my room really was a cave. In fact, everyone took to calling it my "Hobbit Hole," and it quite resembled one.

Goreme was also where we all parted ways. First, Aden and Jae Hee left for Istanbul on the 19th, and Lindsey and Daphne 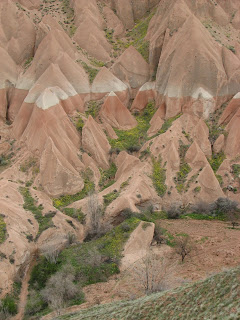 two days later. I stayed another day and visited the Citadel, an immense outcropping of rock which imposingly overlooks the surrounding valley, and is riddled with passages, remnants of an ancient Roman fortress. I swear I almost killed myself several times as I scurried up half eroded stairs at awkward angles, and squeezed through 3 foot doorways. I then hiked back through Pigeon Valley, adding another 2 or 3 suicide attempts to the list, mostly because the trails I was following turned out no to be trails at all, but drainage sluices, and, as you know, water takes the shortest distance down--even if it's over the edge of a cliff. I almost did as well. Haha. Arrived back to the hostel safe and sound, and prepared for the 13 hour bus ride to 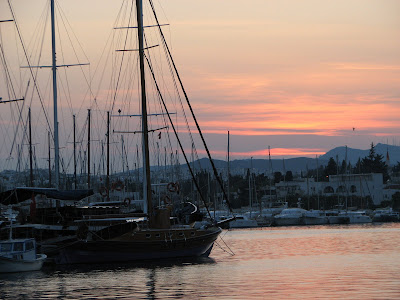 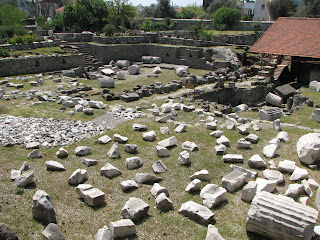 A middling tourist town on the Mediterranean coast, Bodrum, known anciently as Halicarnassos, was the home to one of the seven wonders of the ancient world, King Mausolus' Mausoleum (From which the word "mausoleum" comes.) Also, it boasts the largest underwater archaeology museum in the world, which includes such things as Ottoman shipwrecks, collections of amphorae, and the oldest shipwreck ever recovered, over 3000 years old from the Bronze age. They dated it by finding a seal from Queen Nefertiti of Egypt among the merchandise aboard.

And if this weren't enough, Bodrum was also the home of Herodotus, the "father of modern history." I have a special affinity for him as I have read his book, and took an amazing course on it in High School. I took pictures with his, unfortunately, less than well-cared-for statue.
.
There is also an Alexander the Great battle site which I wandered around, as well as heading to the marina to look around and try to get a fairy to a relaxing beach (at which I failed.) However, I was serendipitously present for the last day of "Tourist Week," which entails much free food, traditional dancing by a local troupe, and INSANE pumpkin carving contests (like the ones you see on TV...) I didn't 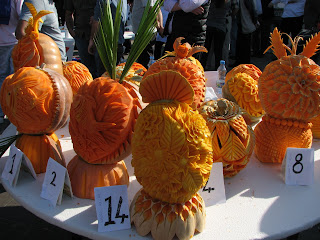 know what was going on, but noticed people with free food, so just got in line. I also tried Turkish ice cream, which is very gummy, and doesn't fall out of the cone if you hang it upside down. (Like a Blizzard from DQ, except they DO fall out...)

Saw all the ruins and most of what I had come for the first day, so was mostly bored, hot, and tired from fruitlessly wandering about in search of another ruin when I boarded the bus for
. 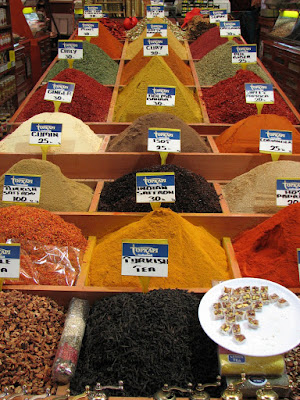 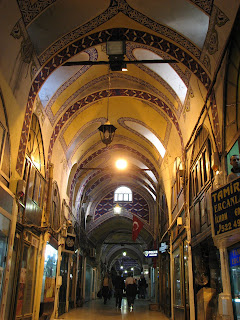 And arrived the next morning. Had two days, and spent much of the time in the Spice and Grand Bazaars. The Spice Bazaar was my favorite. I took tons of pictures, but there's no way to do it justice, especially because you can't record a smell. I could have sat there and smelled mounds of seasonings all day, especially the saffron. Also looked around in the Grand Bazaar for a gift for my future wife, and ended up settling on a beautiful silver filigreed bracelet. I got it big, and can cut it down if need be.

I also had the singular opportunity to visit 3 continents in one day. (Getting lost on two of them.) Asia was the most interesting. I simply went to the ferry port, asked (in 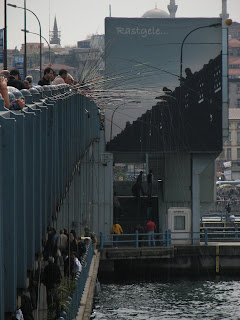 Turkish) if the ferry went to Asia, and when I found that it did, got on. I had no idea exactly where in Asia it was going. Thank goodness it wasn't Turkmenistan and was only a half hour ride. Finding my way back to Europe was a little bit more difficult, but, with some good sense of direction (rare for me), some divine help (not so rare), and some nice people who spoke to me in German, I found my way back. Saw a few sights I'd missed, like the Byzantine aqueduct and the park, and then looked for the Grand Bazaar, getting lost (again.) Finally, it was time to leave, so I packed up my bracelet, my turkish delight, and my remaining currency and headed to the airport. On the way, I gave my last few coins to a performing bagpiper, so arrived in Africa (continent number 3) with absolutely no Turkish money, but a much richer life for the experience.
Posted by Joseph Cunningham at 7:32 AM